The grant for the new childcare education center set to open in just a few weeks in Blooming Prairie is part of a broader grant of $2.3 million awarded to the Southern Minnesota Initiative Foundation (SMIF) through the Main Street Economic Revitalization program by the Minnesota Department of Employment and Economic Development (DEED). 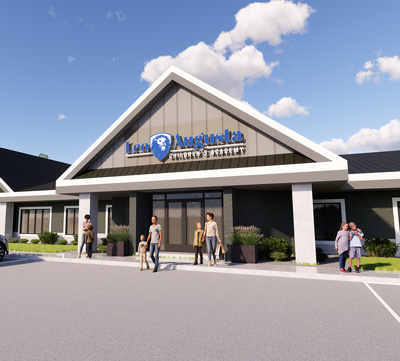 Leo Augusta received the maximum amount allowed under the program, which is designed to address the greatest economic development and redevelopment needs that have arisen in communities across Minnesota since 2020.

The state has given out two rounds of funding. The first was $80 million for economic redevelopment and the second is $40 million to organizations across Minnesota. Fourteen organizations, including SMIF, were selected as partner organizations through the second round.

“I’m thrilled by the range of creative and dynamic development proposals we got from main streets across the state,” said DEED Commissioner Steve Grove. “These investments will help re-build business clusters hit hardest by the challenges of the last few years, and they’ll create jobs and spark economic revitalization throughout Minnesota.”

This latest funding boost puts Leo Augusta within $1 million of achieving its $3 million capital campaign, according to Hinzmann. She noted the academy is now 67% complete with the campaign, which started last fall.

“I prayed on that one,” Hinzmann said of the latest grant. “I knew it would move the dial significantly on what we’re trying to see in this small community. It lends to the credibility and need of what we’re doing.”

The academy, Hinzmann said, is still waiting to hear on several other grants totaling $800,000 that it has applied for in recent months.

Childcare, Hinzmann said, was especially hit hard during the COVID-19 pandemic. She said many providers were forced to shut down, which in turn caused working parents to lose many hours away from their employers.

“The grant received will provide help for Leo Augusta that will provide services for those kids that need care,” she said, noting the new childcare academy will give parents the option to go back to work.

Hinzmann promises that this will not be the last time people hear about Leo Augusta.

“We are here and we are here to stay because we have a job to do. We have families to serve. For anyone doubting this facility, this is the real deal.”

Construction is expected to finish by Tuesday with the furniture trucks moving in to outfit the academy next week. Hinzmann expects it will take three days to set up everything in the interior. Once the interior is done, the only thing left will be inspections.

“It needs to get operating and we need to get the kids in there,” Hinzmann said. “We are going to be a different childcare facility than people have ever seen.”